And I was going to eat it … well, at least take a bite.

The legal disclaimer indemnifies Bremen Patisserie, of Umina Beach, and warns about the risks of "personal injury" from ingesting the world's hottest chilli pie.

For the record I'm no chilli warrior. It wasn't until only recently I'd built up enough resistance to eat an Oporto Bondi burger.

But one particular line rang alarm bells when I signed my life away - the warning that "some problems may occur several days after the consumption of this product".

"I am aware that this product contains the hottest known ingredients on planet Earth which could lead to stress to the heart, asthma attacks and other problems," the waiver reads.​

The evil brainchild of legendary pie man Ron Bruns, who really does make those about to eat the pie sign the disclaimer, is made from not one but two of the world's hottest chillies.

Ron used to claim the unofficial "hottest pie" title for the Flaming Ron when he packed it full of naga jolokia or "viper" chillies until they were superceded on the SHU Scoville heat rating scale by the Trinidad Scorpion Butch T pepper.

So now the twisted baker uses both, as well as a habanero just for good measure.

One seed from a scorpion rates at 1.4 million Scoville units which, put in perspective, can produce intense pain for 30 minutes and is 300 times hotter than a jalapeno.

It's probably also the only pie in the world where the baker has to wear protective gloves, eyewear and a chemical mask to ward off fumes during the cooking process.

It took Ron a year to find a laboratory to measure the pie's Scoville rating and is awaiting confirmation from the Guinness World Record people to make its status official.

Suddenly walking the streets of Kings Cross in a fat suit, learning ballet and all of those other crazy assignments I'd so far dodged started sounding like a good idea.

After a psych-up I dug in.​

My first bite was mostly crust but even that had sinister overtones. By the second or third bite things were getting serious. My tongue was on fire, lips were numb, eyes watering and my heart rate was racing.

I was drenched in sweat, my pupils dilated, hands trembling and I was displaying all the early warnings of a full-blown anaphylactic meltdown.

I've never been pepper sprayed but a military police officer who'd been through it described the feeling to me once and I'm sure this was worse - like a riot cop had unleashed a full can straight into my pie-hole.

As my consciousness began to leave my body and I began to float to the ceiling of Ron's bakery I heard a phone ring.

I thought it must have been Satan looking for the bloke who stole his lunch.

Through fits of laughter photographer Peter Lorimer told me it was the news desk and they wanted video so I'd have to go again.

There's an unofficial award that gets handed out around News Ltd from time to time for going "above and beyond".

It was named after Papua New Guinea journalist Simon Eroro who once agreed to be circumcised with bamboo sticks in order to land an exclusive interview with a band of reclusive and savage jungle rebels.

Even THAT sounded better than a second round with a Flaming Ron.

Earlier I didn't know what scared me more, eating it or the next day during my morning constitutional.

An hour after I got back to my desk I made a beeline to the loo where I was violently ill. A half-hour later I was again back driving the porcelain bus. I don't blame the pie entirely. The litre of milk I drained trying to ease the pain didn't help.​​​

Ron had apologised to me as I paced around his shop in a disheveled, sweat-soaked state but behind his glasses I could sense the former Dutchman took some kind of perverse pleasure in his evil patisserie.

I don't think Ron will mind when I say I'll never have another but in a way I'm glad I did.

Not because I'd faced some fear, taken on some epic challenge and while failing revealed true grit in manning up for the fight - and certainly not from any health benefits of chilli - it is far more simple than that.

Hours later, after the tears, the sweat and the shaking - having crawled out of four circles of hell (two eating it and two more on it's way back out) - I felt almost human again.

From now on I'll stick to Ron's beef and mushroom pie, I hear it's delicious. 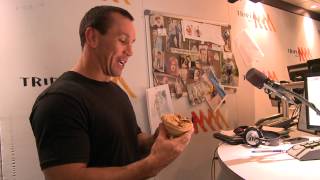